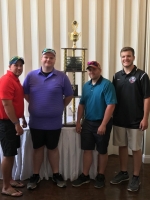 Congratulations Hopwood VFC team of McShane, Jr., Kmetz, Nicklow and Sutton on capturing the Fire Company Traveling Team Trophy for this years golf outing.
About us

The Fayette County Firemen's Association originated in the year of 1939. Perry Stuck from Perry Twp. VFD was the first President and Thurman Reeves of the Belle Vernon VFC was the first Secretary of the association.

The objects of the Association shall be to promote and unify the Fire-Fighting Organizations of Fayette County and further the standing and interest of its membership, in the betterment of active fire-fighting, in the advancement of safety-first endeavor, in assisting to conduct schools of instruction, in a united front standing for the protection of beneficial legislation already secured and the furtherance of other legislation that may be timely and necessary, to show a proper respect to our sacred dead, and provide a Death Benefit Fund.

The Association still maintains over 2,000 members, a number that we have seen drop over the recent years.

The Association maintains a Death Benefit Fund for our deceased members. Currently we are paying the family beneficiaries $250 per claim.

The first Annual Convention was held at Dawson, Pa. July 14th and 15th, 1939 and the first parade was held July 15th of that year. At the parade there were 30 fire departments and 2 auxiliaries in the line of march that included 9 bands and 2 drum and bugle corps and 30 fire trucks, including pumpers, hook and ladder, squad cars and ambulances.

This parade was one of the most spectacular parades seen at Dawson in many years and estimates of the crowd that lined the streets centered between 3,000 and 4,000.

During the annual convention week, the association provides the Annual Memorial Service as the opening of the convention. This service honors the deceased members who answered their final call during that fiscal year.

Following the Memorial Service, the host company holds an Annual Past Presidents Banquet. Leonard Lynch of Perryopolis, and an Association Past President originated the banquet in 1987 at the Perry Twp. Vol. Fire Dept. This banquet honors all the Past Presidents of the association, both active and deceased.

The Fayette County Firemen's Association began to hold an annual fire training school at the Connellsville Airport. After that, it was then moved to the Fayette County Fairgrounds. Currently the Fayette County Firemen's Association maintains a fire-training site on Duck Hollow Road in Uniontown, Pa. It was constructed in the early 1970’s and it provides a site for firefighters to obtain the necessary training that is now required. We offer an annual fire school in the spring and Fire Fighter I & II Certification, Core Rescue Certification, and Vehicle/ Machinery Certification Tests are provided there now, as the site is State Certified